Week one in the wormhole has been a success for the Bastards alts, after finding the right type of hole, and a good connection Yio and I moved the tower, fuel, and mods in the early hours of the morning. Over the last few days the corp's alts have been moved in and the wormhole team is active and earning money. With the tower fully armed and fuelled, we're good for the coming few weeks.

This is a straight up money making project for the Bastards, with people wanting to move up to Capitals, and  some more expensive ships, a way to fund this was required. Rather than farming level 5 mission in lowsec like many of our Shadow Cartel brethren we decided to go kill a few sleepers, and earn some isk that way.

By using purely alts, rather than our mains we can stay active in lowsec, without having to worry about being in the wrong clone, or in the wrong area when the fights kick off.

The pilots have been running a few sites, getting used to the spider tanked tengu, slightly different to our usual fair of fast nano ships with prop mods, but you with just two fully skilled tengu's we can now run any of the CA's within the C4. Extra tengu's can be added to the chain, and with 500dps per ship the sites are quickly completed.

The fit is simple, runs to about 450-500m isk to replace, and provides 500dps with Fury, or 450 with Faction, almost impossible to be neuted down by the sleepers, having only two active mods, damage control and the shield transfer. Even under multiple neuts, you are able to turn off the transfer for a cycle and immediately your cap will jump to to 25% allowing you to carry on repairing.

Each Tengu is able to provide a remote tank of 900omni, and with 60k EHP in the C4 wormholes there isn't a site where Alpha becomes a problem.

Last night I carried out the first payout for the corp, and transferred our just under 2b in isk to the corps members. Considering this was payment for less than a week inside the hole, and most of the pilots hadn't run sites before it seemed a good start. As the skill levels increase, and the pilots get used to living in the wormhole, they will start to hit the mag, and radar sites in the holes, at which point I expect to see the income pick up considerably.

Losses will invariably happen at some point, however as all the members are active PVP pilots on their mains they understand both sides of the coin. We had our first really hostile connection last night, where a C6 was connected to our static, they found the K162 into their C6 within 2 mins of it spawning, and our scout watching the hole soon reported a small fleet in bound to the connection, followed by a large fleet!

Moving our PVE fit tengu's back to the safety of our own tower, I onlined the bubbles on the hole, and sat in my stealth bomber ready to chuck a bomb into the hole should they follow us back into a hole. Luckily for their Helios scout the bubbles hadn't quite onlined when he came through, so I didn't waste the bomb as he warped off into our system for a scout around. He soon left the same way he came in, I couldn't resist chucking a bomb at him and his Sabre friend as they both jumped back over the connection.
Posted by Unknown at 05:46 No comments:

I see what you did there...

Tonight's Evati action was immediate, I like this area already.

I undocked in the Slicer, and quickly d-scanned the system, an Atron & Breacher on scan at a plex, and not much else. I warped over to see one of the locals in a Breacher hugging the gate, he warped out immediately and headed off to a medium plex, d-scan also showed a Rapier on station...

It's a trap, breacher on a medium FW plex? yeah...
I quickly reship into my SFI and head off to the plex, the breacher is sitting on the outside at zero, and lets me lock him, I scram him and immediately start to shoot. Within a few seconds the Rapier decloaks, just as I had expected. I immediately overheat my MWD, and head straight for the Rapier, using the decloaking delay to get into scram range. A turn of events I don't think he quite expected... I then brawl the Rapier down, whilst the breacher pilot runs off to reship into a Thrasher :)

So last night was fun, I spent most of the evening lurking in Evati moving a few extra ships in. The local faction warfare is very strong and there were plenty of small gangs, and solo targets to play with.

Didn't all go my way through, I'd killed the same chap twice with destroyers, and he obviously learned and reshipped to armour fits, thus countering my hookbill. Deciding to test my 400 plate/rep wolf fit I over eagerly warped back to the plex and jumped straight in, not noticing the extra ship on D-scan. A TD slasher ruined any chance of a clean kill, and without the benefit of range, the wolf soon exploded.

At that point I'd pretty much run out of small ships locally, so sending my carrier back to Goinard to pick up some more small ships, I jumped into the Stabber Fleet, and started to patrol the plex's again.

The Dual rep, dual prop SFI is a fantastic ship for faction warfare, able to get into most of the plex's and capable of taking a beating from most contenders.

After a few non starter fights, I find a couple of gangs fighting over a novice plex, whilst I couldn't get inside the plex I warped over anyway to find them all outside the plex.

I immediately engaged them, making one group scatter, whilst the others immediately engaged me. I pulled range hoping to split them up, realising quickly as I'd expected that I was much faster than most of their gang... Most.... Unfortunately they had a condor pilot that was soo much faster that no matter what I did I could neither kill him, or escape him. Hmmm... they started to bring dps ships onto grid to kill me, but the SFI was faster and able to tank heavily enough to kill anything small that got close.
The deadspace area around the gate damps warps so they couldn't warp close enough to catch me with a heavy tackle. A talwar got too close and I dispatched it quickly. Which brought it to stalemate, I couldn't shake the Condor, and it was chipping away slowly on my armour, eventually I would be left with an embarrassing loss mail. There was nothing for it but to call on the batphone and get the corp guys to come and chase him off.
Posted by Unknown at 11:18 No comments:

So now we just need to decide how to sell it.


It's funny as only a couple of days ago I watched as Chribba sold a Revenent to PL, I never expected to be the owner of the BPC so shortly after. The recent Incursion in Nadire, had been affecting our home system so we had been watching it closely to see when it ended, and tonight the Incursion runners had been busy and got it down to 5%, and as we started to form for the bridge back, it counted down.

We bridged to a nearby system, and moved in hoping to get a fight from the runners, and earn some money loot their wrecks, but they must have sensed us coming and gave up and started logging off with the Mom site already spawned.

With nothing else to do, we moved in and cleared the final site. 30 mins later and the Sansha Revenant is dying to our 35man gang. It explodes and the designated looter burns over to open the wreck. As the wrecks becomes empty it's too quiet on comm's he's not said anything, instead his ship is already warping to station...

With the BPC carefully stored in station, we all start to finally believe it... the posted screen shots, the confirmed loot log... 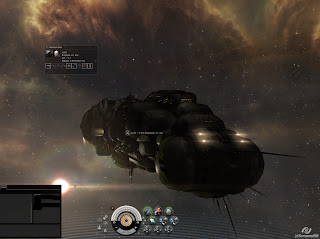