Well the contest ends in a couple of days so I uploaded mine this morning. I learned alot about blender in building this, and its something I'd like to play with more over the next few months. After looking at some of the entries already posted I'm pretty sure whichever ship does get selected its going to be amazing.

I almost hope I don't win, looking over some of the others.... 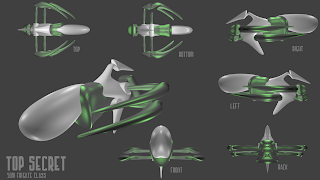 Link to contest details
Posted by Anabaric at 06:01 1 comment:

RL has kept me very busy the last few weeks, and my EvE time has been very limited, so after joining the new corp, i'd not really managed to get out on a good roam to learn how they operate, and start learning the new voices on TS. -Damm greeks!

Last nights roam consisted of a 40 man fleet, 99% dramiels and stealth bombers, with a couple of sabres for good measure. This combination of speed and firepower, meant we could sweep deep into enemy sovreign space, and catch people going about their business.


Eventually the enemy managed to set up a trap with 30+ BC's and small ships. Obvious bait was obvious, however trying to get that one last gank on the board we bit anyway, the response was big and heavy. We lost only 6 ships, a sabre a few bombers, as expected all of the Dramiels survived, I only had one hairy moment when caught in the webs of a hurricane, and as the overview glowing red I became primary drone target! Overheating my AB I pulled out from the pack and spent the next few mins being chased by all the drones. We disengaged and pulled back the 20jumps back into our own space.

Ever since I first created my Anabaric, I've always regretted not finishing the Avatar. It never said that once you press create that you'd not be able to change anything.. ever! So rushing to jump into my pod, and kill some evil pirates I pressed random a few times... Bugger!
So then I read this and am happy to say that we all get another chance to make over our charaters, adding new features, clothing and even feet!

As everyone is going to have to remake they're character or be faced with being a silouette, it does make me wonder what I'll look like in a few months time. And what of the famous faces of Backdoor bandit? Will he still look quite so happy?
Posted by Anabaric at 09:52 No comments: