The Minmatar Rifter has been the pretty much the undisputed king of T1 frigates pretty much since the dawn of time, or at least 2009 when I first started flying in New Eden. If you wanted a frigate that basically said I'm a pirate lets fight you jumped into a Rifter and warped to top belt, and that's held true for many years.
But could that all be set to change?

CCP have been stiring things up in the ship classes and the cumulative effect is very interesting, first Hybrid's weapons got fixed, suddenly light neutron blasters could be fitted to pretty much everything, and with the null ammo getting a much needed buff to range/falloff it became possible to hit things at 10km with close range guns, something the Minmatar had worked out with Barrage ammunition a long time ago.

Then last month the T1 frigates got a big overhaul, the humble blaster merlin became a viable ship and the Incursus well that has become a bit of a beast. Given an extra lowslot and a bonus to armour repair and enough pg and cpu to make sure that you could use the extra slot. There has been a massive amount of interest in the Incursus on Battleclinic, and some truely epic fits have been posted, a dual repping version that can tank 200dps even before any gang bonus's are applied. Standard fit's pushing out well over 200dps are not uncommon.
The Incursus versus Rifter debate is still going strong, lets start by looking at the cookie cutter Rifter as the main contender.

Rifter's main advantages in the past have been that it's faster than most T1 frigates, enabling it to control the range of the fight so it can either come up close and brawl with high damage fusion/pp/emp or sit out at 8-9km and using barrage to pick apart the tank of it's victim 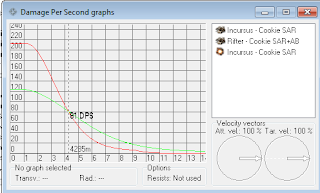 As you can see anything under 4.2 km the Incursus is pumping out far more damage than the Rifter, the exact damage will vary slightly for the Rifter based on what ammunition it's loaded. But the range/falloff will be the same. 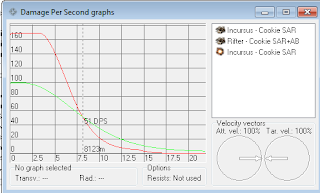 Now we move to the Rifter's old stand point versus Gallante ships, move to max range hit with barrage. Now max combat range is usually between 7-9km and you can see with Null loaded it's only after 8km that the Rifter actually applies more damage.

The Incursus now has the first call on the fight range, with marginally more speed.
Blasters track better. The Incursus also has 25% more tank versus fusion than the Rifter versus Antimatter.
The Incursus can also reload in only 5 seconds, thus switching from short to long range ammo.
In a close range fight the Incursus puts out an additional 100dps against the Rifter, and switching to T2 long range ammo, as you can see from the graph above it's only after 8km that the Rifter actually applies more damage, so with the extra tanking ability of the Incursus it should be an obvious winner...

But there's still a catch.

Cap warfare: The utility high on the Rifter can make the difference, by fitting a neut the close range fight changes in favour of the Rifter with that small neut causing problems for the Incursus only 30seconds into the fight stopping him from being able to repair. The Rifter also has more armour which means it can absorb far more punishment from the Incursus before it has to start burning its own tank and cap. So in the end it's going to come down to pilot skills more and more, as these two ships have finally been brought into balance, which pilot is going to Fight Smart®?

So after my last few weeks of computer hell, with bits on back order, and getting the wrong bits sent though, and delivery delays I finally have a working PC again. I'm still waiting for a compatible waterblock for the graphics card, but figured I'd just have that air cooled while I'm waiting.

It's been a few weeks since my last kill, when I'd caught a noob ferox ratting in (0.3) Akila, and I was impatient for more, with detail set to max my new system was really making it all look pretty. I flew the rifter back to goinard hoping for an easy kill on the way, the only ship I'd seen was a Myrmidon ratting which wasn't going to be a good fight for the little rifter. I warped in at range to his belt just to confirm the pilot's name so I could reship and come back for him. He ran as I landed leaving a couple of drones...
Always a good sign when the pilot gets scared easily, a quick bit of history searching came back with tendency towards buffer fits, and a less than great kill record.

Switching out in Goinard for my dual MSE Harpy I flew the couple of jumps back and started the hunt, I chased him out of a few belts then across a few systems, he eventually went and sat on the gate under the sentries where I couldn't shoot at him. I thought about using the batphone and getting some support but figured as I hadn't installed mumble yet it was a hassle.

During the hunt I'd seen a legion a couple of jumps back, so figured I'd go back and see what he was up to.
When I entered the system there was a few people in local, the legion was still on scan, now obviously in a belt, but nothing else, a few nervous alarms went off, this has to be bait!

Quickly landing in the same belt as the legion, just in time to see him warping off to the next belt... without thinking I immediately selected the belt and hit warp to zero. I landed right on top of the legion and immediately engaged the scram. overheating my AB I moved into a tight orbit and started to fire, I'd already selected void ammo on the warp knowing I'd need all the DPS I could squeeze out of the harpy, and his shields were now melting quickly as expectected. Then the dreaded alert for scram/web appeared on my overview! Shit I thought, he IS pvp fit! Checking D-scan I saw a rupture appear. Oh well, no point in trying to leave now. His laser's were completely ineffective the pulses falling behind my tiny little ship, I was barely hurt at this point still in 80% shields. But with his friend now on the way, I didn't really expect to make it.

His armour was dropping steadily, now down to 30%, he'll start tanking in a moment I thought, any moment now I thought. 20% That rupture still hasn't arrived...  10% The legions starts to bleed structure, I look around again for the rupture which is still on d-scan but not close.
Strange I thought as the legion pops, immediately scooping the loot (finding nothing good).
Best I go find that rupture... 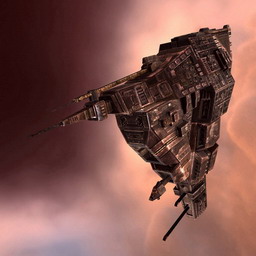 The rupture was actually a far harder kill than the legion, with a flight of Warrior II's chewing away at nastily at my shields I finally dispatch the flight with about 10% shield left and start to work over the rupture itself, at this point his missiles were the only thing doing any damage, with his main guns missing the small signature of the Harpy. I was more than happy to see this missiles exploding on my shield as it meant a distinct lack of neuting.
The end result was the same as the legion, the small harpy killing two "superior" craft.

Flying back to Goinard to dock and rest, I look over the killmail to see exactly how the Legion was fitted, on first glance it didn't look bad, I was surprised it hadn't managed to tank the blarpy's 250dps. It was only when I EFT'd it later that I realised quite how bad it was. At maximum skills and overloaded it struggles to tank 170dps and only 150 versus hybrids, so the very reason he didn't appear to be tanking at all during the fight, was in fact that he'd been tanking the whole time...