Pilgrim - The choice for the Patient Hunter

So this is the culmination of several months of flying and learning about the Pilgrim. 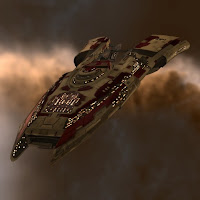 One of the biggest issues with soloing in a pilgrim is getting inital tackle, as in order to apply your neuts you have to be inside of 12km, basically inside of scram range, this means you'll be getting scrammed back likely as not, and quite probably webbed. You also want a scam, and a web, and ideally the tracking disruptor to maintain control of the fight.

A pilgrim is very much unlike a curse. Whilst the curse can easily land at zero in a belt, and using its relatively high speed, can quicky apply a long point to a target who's just off the warp in, immediately one shotting their cap, thus preventing even any frigates from MWD away. The pilgrim is a diffrent breed of ship. It has no range bonus to neuts, thus with mediums your range is only 12km. You can faction fit to gain a few km, but is it worth it?
Being a natural armour tanker it's got a fat ass and isn't going to win a race with most things, unlike the shield tanked and very often Nano'd Curse.

So you have to overcome certain key issues:
(1)Slow, cloaked you are slower than most ships you would plan to engage.
(2)De-Cloaking delay, even at maximum skills you still have to wait 5seconds to BEGIN to target someone.
(3)Short Range neuts, 12km, 14km with faction items.

You need to stay within 10km for those vital first few seconds until you can target them and apply your scram.

EHP: 21.8k not huge, but this isn't about absorbing damage.
Resist 68.1em  80.5them 64.1kin 74.5exp
You can overheat for 85.3% thermal, do this against everything but Caldari, who will be throwing Kinetic damage more than anything.

Armour tank - With your MARII you get 145dps omni, which will overheat for 186
That's actually 184 non heated against RF Phased plasma, and 141 against Navy Antimatter.

This fit is stable with all your EWAR and AB, you have to Pulse/micromanage everything else as required. It's a case of keeping them as neuted as much possible whilst tanking any drones, you should be able to tank most unbonused drones quite easily, if your struggling you can always use your warrior II's to make short work of anyone's drones.

My Notes:
The Pilgrim is almost always best used in known systems, it's use is more for the careful and patient hunter rather than the balls to the wall Curse pilot who can just warp in at 10km and immediately burn to get point. Its well worth taking the time setting up pounce points above all the belts you plan to hunt in, this gives you the ability to use roids and wrecks as warp-to points within the belt to get you as close as possible, and you will want to be as close as possible. You can of course try to warp to the belt in front of your target, and decloak immediately you see him on short scan.

Once your in the belt with your target you need to try and get in front of them, ideally within 10km before you decloak. The MWD on this fit gives you a burst of speed upto 1700ms, this is ramming speed! In order to prevent larger targets from warping out of the belt before you can decloak and tackle them, you actually try to ram them off alignment, also once you have got tackle on leave your MWD on a cycle or two, this heavily depletes your own cap, and makes your NOS act like a third Neut, which in turn helps bring your targets cap to zero. At this point you need to convert back to Afterburner, this drops your signature and orbit speed. You should aim to settle into a medium orbit 3000-4000 is usually about right, as this gives you a relatively tight orbit maintaining high traversal. If you try to get any closer you will actually reduce your traversal as your ship slows down to turn. Going too far out lowers traversal too much and ables your target to shoot you. You should now be able to pulse your armour repper to negate any minor damage, but reallt by this point you shouldn't really be taking much. Don't leave your neuts on, you'll just cap yourself out as well, keep your NOS on the whole time, and pulse the neuts as often as you have safely enough cap to do so.

Now its just a case of sitting back and waiting for your drones to finish him off.

So what can you tackle, what should you try for...

First what you should probably avoid, anything really kitey, really fast nano ships with good damage.

Basically if it can consistantly hit you from 20+ km with more than 200dps, and if its much faster than you, like a Vaga it's probably a bad choice of target. If you can frighten it off with a flight of warriors it's not so bad. So any frigate or  ceptor will not like your damaged bonus'd Warrior II's chasing them. Likewise the T1 Stabber shouldn't be an issue.

Being cloaky you should have freedom to avoid taking on fights you can't win.. however if you do get tackled in a belt move into the roids, this will cause the orbiting ship to crash off the roids changing its orbit hopefully you can either get your scram onto it, or run away. Also remember you don't have huge DPS so anything with a strong active tank can be a long time killing as you basically have to wait for them to run out of capboosters, and hope their friends aren't close enough to support them.

Other than that most other ships are valid targets, just accept that any good frigate pilot will usually get away before you can get a lock on him so don't get too mad when you can't catch them.
Any T1 cruiser should be an easy kill, as are most PVE mission based setups. I personally prefer taking on turret based ships due to the tracking disruption bonus, but you can signature tank a cookie cutter drake, and they do go down quite quickly once the hardners go off.

As always be situation aware, keep an eye on local, and short scan to make sure you don't suddenly become the hunted.

As with any ship, gang links can make all the difference, adding a command link loki makes this ship incredible, the three skimish links make this ship totally relatively agile and help with the signature tanking, and if you've got space passive defence is the best armour link to run to compliment the ships natural resists.