Hunting bounties is dangerous solo work. Often your only backup is luck and skill, and luck just took a vacation. Your mark is good, maybe one of the best, but you know you’re better. Hi-sec, lo-sec, 0.0, it doesn’t matter…you always bring home your prey. For the right price.
It’s time to teach a new player what you know. Put your best Atron or Executioner Bounty Hunter loadout together that a 45-day old player can use.
We’re going to clean up New Eden with a fresh crop of Bounty Hunters, and your loadout advice is gonna make that happen.

Post an Executioner or Atron loadout It must be:

• Flyable by a character who’s about 45 days old, especially characters who use these packs
• The loadout must be 100% flyable within current game mechanics
• Must include a rationale explaining how to fly the loadout
• Full stats are highly encouraged. Use EFT.
• Link your fit back to this thread!

Loadout contest rules
Unlimited entries per person, however, only quality fits with stats and rationale will be eligible. One prize per person. Decision of the BattleClinic judges is final. Judging criteria: The loadout must conform to the contest requirements (same ship, fit according to the role announced). It must fit according to the current expansion's ruleset and all required character skills at 5 or below. The loadout should be practical, though uniqueness and creative thinking are encouraged. The stats should match your rationale; that is, if you call it an armor-tanker, it must have high armor repair rates or resists. Loadouts must stand by themselves unless the contest specifically requires a fleet-fit. High +1 ratings will be considered by the judges but are not the determining factor; the quality and usefulness of the loadout by a player are the main criteria. Prizes have no cash value and cannot be redeemed for cash. No purchase necessary, void where prohibited.

To enter upload a ship to the Battleclinic fitting forum, and link to the competition thread.

Another week, another holiday...

We're on holiday again at Shadow Cartel central, this time we're deployed up to Sendaya on the edge of nullsec, which of course means I've been failing miserably and loosing ships in 0.0 I'm not sure how many Sabre's it is now, but I remember them being better...   maybe it's just my lack of Falcon alt.
Which still seems the order of the day, in and around Doril. The amount of fights I've had to run from when suddenly a falcon decloaks, and I'm perma jammed.

It's one of those mechanics I just can't bring myself to use.
And every time someone uses it on me I'm like this:

Open to all, you just need a Battleclinic account, post a fitting, if it's good enough, and the moderator team likes it, then you'll win the SFI, delivered anywhere in highsec. Simples!


OK, so since the hull updates we're short on good T1 Stabber fittings for the loadout boards, so a quick challenge for you Elite PVP'ers, EFT warriors and forum trolls.


Show us what you got, be it PVP or PVE, armour, shield or even hull tanked!
The best one as judged by the moderator team gets a shiny new Stabber Fleet issue delivered anywhere in highsec.

Post your fitting on the loadouts section as normal, then link into this thread.
Fittings must be possible with in game mechanics.

All entries to be in by close of business Friday 24th May.


Please Note: Full description, with stats is much much more likely to get you the prize.

Feeling a bit rusty at PVP so figured I'd jump into something I'm familiar with, my go to ship for a fast solo roam is the Slicer.

Took it out for a short trip and didn't see much, chased a jaguar for a few systems but eventually he docked up and wouldn't come out to play. As I was leaving Basan I cross jumped a condor, and found his mate in a Kestrel on the other side, the kestrel quickly followed through into Basan, I waited a couple of seconds to see if they would come back. then burned back to the gate and jumped in. The condor was on short scan but the kestrel was nowhere to be seen.

As neither was flashy I had to either wait for them to engage, or move the fight away from the gate. As I was taking range, the Condor and Kestrel both landed back on the gate at zero, the condor immediately started to burn out to me, At 170km I turn off the mwd started to swing round the gate, keeping my distance from the much slower kestrel.

Note:
In any two versus one fight you want to control the range of the engagement. This means you can engage and kill each ship on it's own, rather than allowing both ships to shoot at you and use their ewar.
For this fight I had to be at least 150km from the gate in order to be able to shoot first without sentry guns.
When the fight starts I want both ships inside 150km so they can't warp to each other.
I need to keep a minimum 20km from the kestrel, and a maximum of 20km from the condor. This will allow me to shoot at one, and avoid getting webbed or scrammed by the other.
Condors are usually very fast, this one was doing 4000ms but also very fragile, the common kiting setups use either 2x damps, or 2x tracking disruptors, both of which will ruin the slicers natural abilities. Kestrels could be AB or MWD, but as he was doing 1000ms I could safely assume AB+Scram.

As the condor gets closer, I swing round, hit approach, overheated the MWD and closed the gap, his ship stalls - it's immediately apparent that he'd used the orbit command, being midcycle on his mwd he would have to wait the cycle out before he can do anything, as I've started my MWD heated I'm faster than him, as his ship is now trying to run away to hit it's orbit range his ship is heading directly away from me, with virtually zero traversal. The Slicers high EM/Therm lasers quickly destroy his ship before he can get enough range to use his damps effectively.

Locking and holding his pod for a few seconds gives the kestrel enough time to burn closer, I switch over to the kestrel which was a AB fitted rocket kestrel, he really shouldn't have left when his friend went down. But to my horror, he warps off in deep armour. Somehow I'd managed to click off the disruptor... oops.

Back in the saddle

Setting up the wormhole corp took a surprising amount of my time, mainly in teaching the mad dog killer pirates about shooting little red crosses. Scanning out sites, and keeping track of wormhole constellations via "Siggy" PVE doesn't come natural to us!

But anyway, you didn't come here to read about PVE and wormspace, you came for explosions and excitement!

Well to get you started watch this:

I've also opened a twitch account, so once I've worked out how to use the damm thing I'll start streaming some sessions.
Posted by Unknown at 04:27 No comments:

Open op for everyone!

Drunk Roam will be 18th May 2000 eve time.
These are the rules contract Me in game which is Marco Drack and on twitter @MarcoDrack.

Meet up Location will be EVATI.

THE BASTARDS' DRUNK ROAM REQUIREMENTS:
A FUN roam, no sad faces!! Come out of the Captain's quarters and fly spaceships and get drunk!!

1. Join the in-game channel 'INDEPENDENCE' for details and fleet pick up and vent info on the day.
2. Any T1 frigate/cruiser fitted out with whatever you want.
3. Yes, fit a rupture with lasers if you want.
4. Or a thorax with arties and missiles.
5. Or a rifter with a cruiser sized weapon.
6. Or bring a Celestis.
7. Mix your weapon systems. Why? because we can and that's how we roll.
8. Points required of course, we can't have people running away.
9. We each drink a shot of spirits (or beer) every half hour during the roam and after each ship kill and after each ship loss and for every ransom.
10. Aim is to see who can stay up for the longest.
11.Needs to be frapsed with some vent recordings as well.
12. If you decide to fit a stab (why not?) then you have to say 'STABBED!' in local, take a shot of alcohol and then RUN like the wuss you are when you get tackled. If you do this and get smack - everyone else will need to take a shot on your behalf.
13. Any other rules that the FC wants to make up... 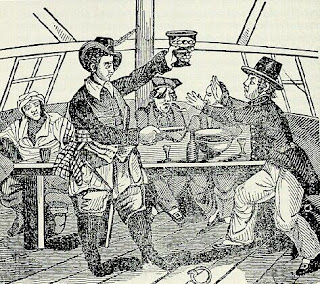 Move into wormhole with alt

Well the monkeys are now grinding sleepers happily in the wormhole, I'm sitting on a pile of loot in Jita waiting for the best time to sell on the market. The alt corp has been active in the wormhole for 3 weeks, and  we have already paid off 50% of the start up costs, as well as 2b in "wages". There is loot totalling 3b+ in Jita, and another 2b sitting in the tower waiting for a suitable connection to highsec.

The monkeys in the wormhole are pretty confident now, and are chaining holes, and ripping through even the hardest mag/radar sites with ease.

Luckily I'd put a market order out for POS fuel, so we're sitting on 2 months supply which should allow us to ride out the recent hike in fuel prices.

Redfrog are being highly efficient and hauling all out shiny loot from whatever random highsec connection we get straight to Jita. By splitting the cargo into sub 1b contracts, and having the maximum collateral set we're covered even if the freighter gets killed. Consider this a free plug guys! Many thanks!

So with the alt's happily grinding isk, Bastards will be buying a stack more corp ships for roams and derps.

And more importantly I'll be back flying Ana and getting them all blown up. Hopefully I haven't turned too many pirates into wormbears in the process.