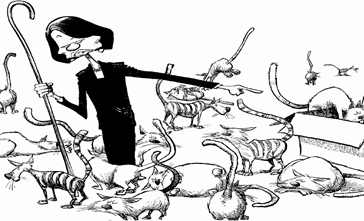 What does the FC actually do?
FC'ing is actually relatively simple in theory, you need all of your people in the right place, shooting the right thing. If you can manage that task usually you'll start winning fights.

In practice of course there is much more to it than that, getting people undocked together in a cohesive fleet can often be a challenge for some groups.

But we have an FC, why should I start doing it?
In every corp or alliance there is usually only a few FCs that are willing to step up and take people out on roams. This can often be the difference between an active alliance, and a disbanded one. Everyone should try commanding the fleet, you learn a lot in a short period of time. The best FC's aren't always the ones with the greatest skill points, or the shiny ships.
FC'ing can often be stressful, some FC's will log on to relax only to find that everyone is immediately asking for them to start a fleet and spoon feed them content. The more FC capable pilots a corp has the less likely those FC's will burn out.

How much SP do you need?
Very little is the answer to this. Is does help to have some SP invested into leadership, but you can FC from any position within the fleet, be it squad member, commander, or the wing or fleet position. The only thing I would say is make sure you have enough skillpoints to pass down any bonus's. At leadership V you are able to pass bonus's onto a squad of 10 pilots. It's a relatively short skill and I encourage all pilots to train it, even if they are not going to actually run the fleets. The leadership skills also pass on benefits to the pilots in the squad, you should check them out, as extra HP, agility and scan resolution are often very nice to have.

What do you need to know to start?
Knowing the capabilities of your fleet is the starting point. There are many different types of fleets to fly in EVE, and knowing what your fleet consists of is the first step. Your composition should dictate the types of fight you should take, and also know which ones to avoid. It's beyond the scope of this blog to discuss all the  fleet tactics, but you should try to know a little about the type of fleet you want to run.

Where should we go?
Once you've got your fleet undocked and ready you need somewhere to take them, route planning is a combination of knowing the area, the groups within it, and looking at the map.
If you are not familiar with the star map, press F10 and have a play. The starmap, is a map of New Eden, it contains huge amounts of data about the current server state. Look at the statistics options, the map can tell you including: Ships/pods destroyed in the last hour (recent hot zones), NPC killed in the last... (ratters/missioners), ships in space, jumps (how active stargates are), cyno's, and much much more.
Take some time and look though the options.
There is no point running though 50 jumps of 0.0 where there is only a couple of people in the entire area. Find a busier area! After you've been in an area for a while you'll get a sense of where people are, most groups will base out of a few systems, and will be very active around them. Going to their home system is often a good way to kick the hornets nest.

What fleets to fly?
When you're learning to FC fly something cheap, a brawling gang is a good start, as you pretty much just get everyone to warp to zero and start calling targets. Fly a gang you're familiar with, if you've only ever flown nano gangs, don't start with a brawler! Make sure that everyone knows your in new to FC'ing and brings sensible ships to the party. If you tell everyone that they are likely to be exploded, and that you're not going to pay any reimbursement they will usually bring something suitable.

Who scouts?
When you're starting out don't scout yourself, even if you're in a small gang it's better to have a dedicated scout/tackle. These often die as the fight starts, and you really don't want to try FC'ing from a pod.

OK, so I've got my route planned and everyone is undocked, now what?
Get your scout to start the route, make sure everyone knows what the next destination is. Your scout should be one or two jumps ahead of your main group. Keep the rest of the gang together, make sure that everyone is keeping relatively quite on comms. I usually ask that people type in fleet rather than over voice comms, that way when the scout or I say something it's heard and immediately understood.
If people are being noisy on comms tell them to shut up. It's your fleet you are in charge.

Keep the gang together, don't let people start wandering off to random belts and shooting NPC's.
It's often worth keeping moving, if your scout doesn't find anything within a few minutes of jumping into system, tell him to move forward to the next one. Boredom is a bad thing in a fleet.

Scout's found a target what now?
What happens next depends on the target, when you're starting out just get the scout or another dedicated tackler to warp in and tackle it. As soon as it's caught jump the rest of the gang in and warp straight over.
As you get more confident (and depending on your fleet comp) you can start sending in a smaller force to try to escalate the fight (he warps his friends in, you drop the rest of the gang and kill everyone!).

Who do we shoot? - Target calling
Other than getting the gang to the right spot, you need to shoot the right things. It's usually better to focus fire the entire gang on one ship at a time as this clears enemy DPS off the field fastest, start by calling a single ship primary, whilst you're doing this look for another target call this secondary so that everyone should have two ships locked.

Be clear on what target everyone should be shooting.

And so forth, depending on how quickly the enemies are exploding you may need to call a tertiary target as well.

ABC in the Thorax is Primary
XYZ in the Vexor is secondary
Lock up DFG Thorax, and EHG Maller

Make sure that you have locked the extra targets too, if you see they are taking damage, tell everyone to focus fire. Be clear on your orders, tell people to shut up if needed.

Clear Comms!
Stop shooting the secondary target! Primary is ABC in the Thorax.

People will understand and listen if you are clear and concise.

Target Selection
Target calling is making sure everyone knows who to shoot, but you as the FC need to choose the target. Again this depends on your fleet composition and the situation, you'll learn this with practice.

Ideally you want to clear as much of the enemy DPS as quickly as possible whilst keeping as much as your fleet alive as possible.

1. Fragile ships with high dps - Anything likely to be squishy is a high value target (ie Brutix is a shield gang)
2. High DPS ships
3. Everything else.

Don't get bogged down with grinding highly tanked low dps ships - a Drake is a good example of low dps, high tank, as are Mallers, and the prophesy. The more you know about ships and their capabilities the better FC you will become.

Now in some situations there are other threats which need to be dealt with immediately.

Force multipliers such as recon ships, and logistics can drastically change the outcome of a fight. Learn these hulls, learn the risks, and recognise them. These threats should be considered as priority, and you need to make a call early to either kill, neutralise or ignore. This subject requires it's own post, which I'll follow up with soon.

In conclusion
Like everything else in EVE practice is key, the best way to learn is go out there in a cheap fleet and start exploding. No one will worry if you derp a few times, as long as you learn from your mistakes. Don't worry about loosing ships, I've seen highly competent FC's welp billion isk fleets with a bad judgement call, but I'll still fly with them the next week, as I know they won't make that mistake the next time.

We would all rather go out in a "suicide" roam with a new FC than just sitting round in local, waiting for something to happen. The one thing we all agree? FC's are important, and we love people for stepping up and making it happen.