Coming soon to a belt near you... 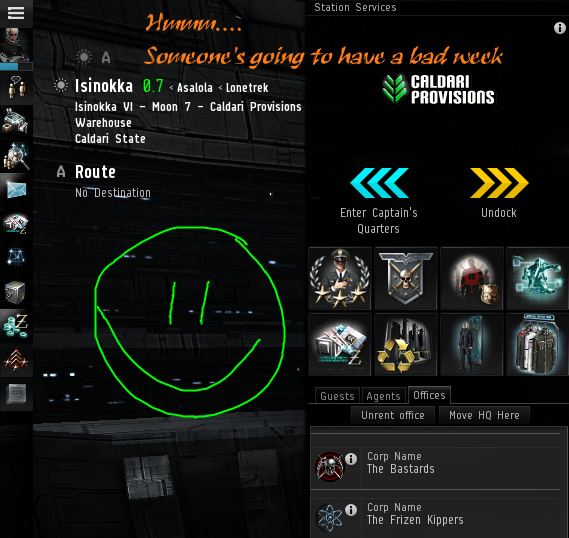 So one of the Bastards Ithica Hawk had a fun idea for an evenings entertainment, we would all jump into T1 Haulers and rather than just try to explode we would have a race across part of New Eden. We would have to pick up some special loot items on the way just to ensure we completed the course.

The rules where quite simple, and deliberately ambiguous.

Unsurprisingly the dirty play started immediately, with myself offering a bounty for TFS Tibbs immediate destruction. We all undocked and started to the fleet align to a distant planet, a sorrier collection of pirates in haulers you'd be unlikely to see. A mixture of lasers, blasters, had been bolted onto the haulers. The Nereus was king it would seem, with several bastards realising that 3 drones could be very effective.

The first task, a simple warp to a safe spot and pick up a single loot item from two different cans, to make it more fun the cans were also 50km away from each other.

As the haulers landed on grid the fights immediately started, with drones launching and blasters tearing chunks out of everybodys shields. Tibb's hauler started smartbombing. Launching my drones at Tibbs, I burned 10km straight up away from the furball, then headed over to one of the cans.
At this point I also decloaked my dual boxed loki and started webbing the other ships, it took them several minutes to realise quite how much dirty play I was willing to use.

Tibbs soon exploded, and dove off to station to reship, I continued to cause chaos with the loki, whilst having collected my two loot items was off out of system and heading towards to the waypoint 12 jumps away in lowsec.

Many of the other haulers were still on grid fighting each other, rather than trying to run with the loot. Tibbs reshipped into his nano'd cloaky hauler and soon had both loot items and was in pursuit.

I was making good time, but then jumped into the middle of a hostile faction warfare fleet...
realising that I should probably have fitted a cloak rather than a neut, I had little options but to deploy drones and look scary! Strangely the ships that had me pointed immediately ran away!! I was a little shocked at first, then as the Shadow Cartel gang landed on grid I realised they assumed I was bait :D
I waved at some of my old alliance mates in Shadow Cartel, who obviously a little confused why I was in a hauler, and quickly warped off before someone had the sense to point me.

Punker met one of the gangs en route and was exploded.

The rest of the journey was a little less eventful, Tibbs was starting to catch up in his cloak+mwd hauler, whilst my 400mm plated hauler was feeling a little fat off the gates, offlining the plate (still not sure that helps) I hoped to gain a little agility. As we hit the final system Tibbs caught me up and docked first to pick up the return trip loot. I landed on station just as he was undocking, but not close enough to scram and kill him.

Meanwhile the rest of the group, had either started their journey behind us, or after reshipping into a combat ship, and where planning to ambush us on the way back!

On the return leg, Tibbs extra agility was making huge differences, and he quickly was one jump, then two ahead, I could only hope that he would be exploded on the way home!

We didn't run into any trouble on the way home, and the "gate camp" that should have prevented our return were too busy shooting each other to actually stop us. Tibbs arrived home, and finally managed to force Ithica to accept the trade and win the race.

I arrived shortly after, traded my loot for second place, then undocked in the hauler and flew back to the gatecamp planning to suicide myself. In fact I actually made short work of Tekei's Rifter and was happily chewing on the somewhat surprised tristan belonging to Punker, when Lazy decided to shoot me.

All in all a great fun race, and thanks to Ithica Hawk to running it (who as official observer should have brought a bigger ship!)

The final scores for the Deathrace where:

Congratulations also to Sarcos for winning the 'Spirit of the Race' for stopping multiple times en-route and trying to kill passers-bye.

Anabaric takes home the 'most kills' prize and bonus title of 'dastardly motherfucker' for his legal, yet unexpected use of a loki to web the competition.

Commiserations to Tekei for being the most shit and being destroyed and put out of the race at the earliest opportunity.

From 7-8 starters only 3 returned safely: Tibbs, Anabaric and CPT Shannon Igans so well done.
Especially to ShannonIgans for successfully running the 'bitter-vet' gate camp formed of Anabaric, Tibbs, Punker and Lazy who couldn't catch a single T1 hauler between them.

The Death race was a good laugh for all involved, we'll be running this again soon, and opening the doors to all of new eden. Whilst I expect it to be a clusterfuck it should be a giggle. To stay posted on events by the Bastards, or for recruitment information join the Dbastards channel in game.