Slashing at the Enemy

Anabaric moved closer to the rupture, it still hadn't attempted to neut him, but there wasn't any missiles either... so he was pretty sure the rupture was baiting him into getting too close but he had to know.
Moving in a tight arc around the Rupture, the 220mm autocannon dangerously close with every shot to tearing the Slasher apart, each hit tore off 50% of his shields, and every time the new Ancillary booster kicked in and repaired the damage, but with only 5 charges left he had to commit to the fight or try to reload.

Approaching again, he fired at the rupture, which showed minimal shield damage, then at 13km the web effect surrounded the Slasher, and the rupture fired up it's MWD racing towards the Slasher. Scram warning followed, with the dreaded energy neutralisers starting to suck the cap out of the frigate.

But expecting this Anabaric had already overheated his afterburner, and with the rupture also scrammed the Slasher pulled range back to 9km outside the deadly range of the neutralisers. Now with the rupture scrammed and tracking disrupted he could concentrate on clearing the warrior drones that were trying to catch and kill him... 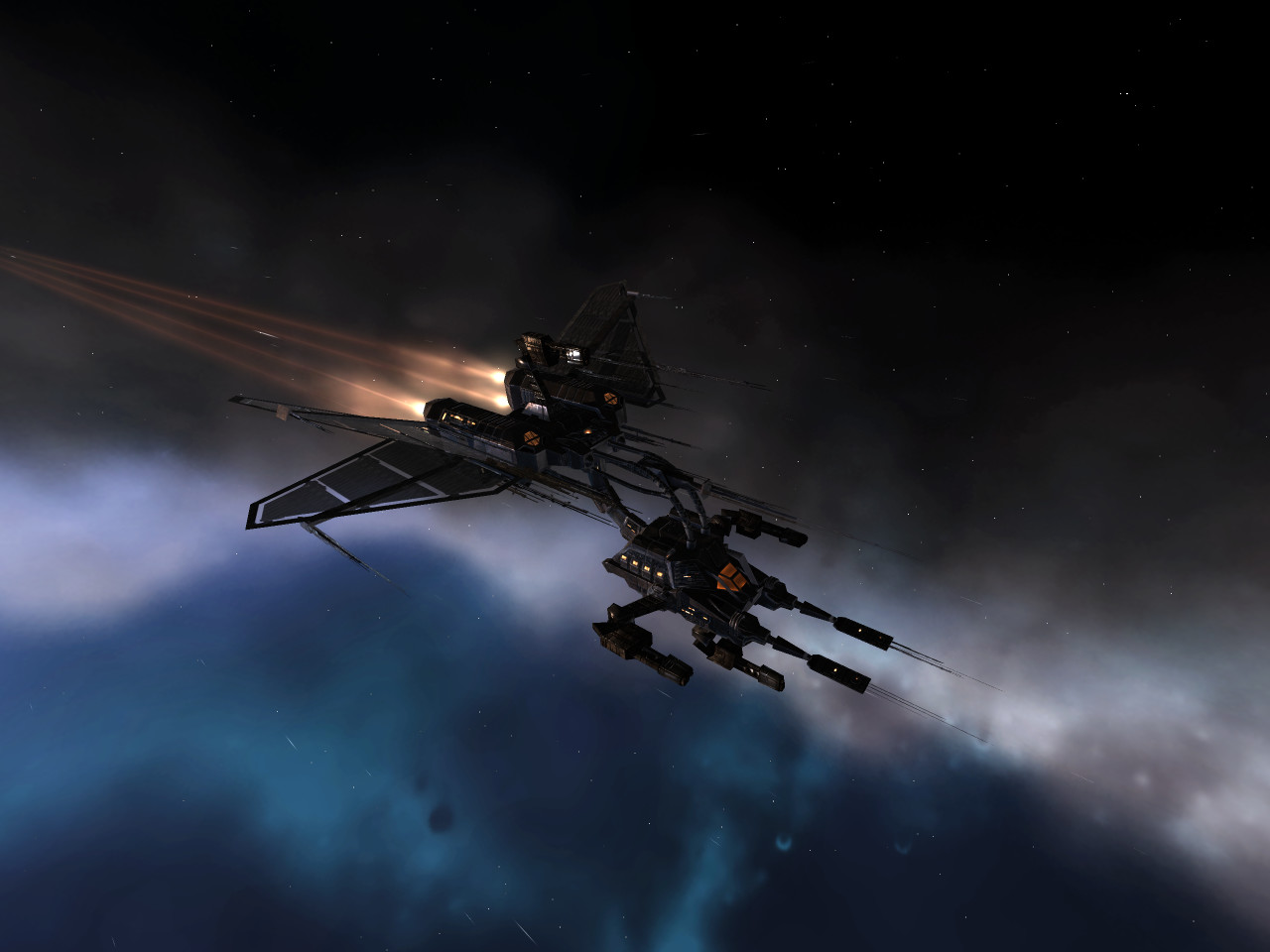 It was taking too long, the drones were long since dead, but the applied damage to the Rupture just wasn't enough, unable to get closer because of the neutralisers, he could only pepper it with Barrage ammo, as the Rupture entered armour Anabaric realised a little late that the web+scram meant it was going to be a 1600plate rupture, there was no way he was going to do this before support came. Putting a call out on alliance comms, and a couple of Shadow Cartel pilots started to the head down the pipe towards Basan, some six jumps out.

Just then 60km away the Gate flashed signalling another pilot coming into local, the same gate the Rupture had come from, checking local quickly confirmed his suspicions that the Rupture had also called for support, things were about to get interesting. A Navy Slicer decloaked and burned straight towards him at 3000ms. Leaving the Rupture, Anabaric started burning away with the 220's instantly finding their mark as his traversal lowered. Heading up away from the cruiser, which was already running to the gate in the opposite direction, sure of his buddy's ability to kill the lesser frigate, Anabaric knew his only chance was to separate them enough to engage just the Slicer.

The Slicer was fast, stupidly so, orbiting out at 20km it started to rain purple fire on the Slasher, pulsing the ancillary booster Anabaric managed to pull the fight still further away from the gate. Being a veteran Slicer pilot and knowing their strengths and weaknesses intimately, he switched to optimal range disruption forcing the slicer to come just a little closer. The slicer was still trying to orbit, this was exactly what he was hoping for Anabaric forced a slingshot and hit approach, his overheated scram finding it's mark on the Slicer, the Rupture realising his support was in trouble started to head back out from the gate but it was already too late for the fragile slicer.

Quickly switching back to the rupture, local spiked again, and this time a daredevil jumped in and started to close on the fighting ships, this was going to end badly...

Just as the Daredevil got within range the Shadow Cartel support fleet landed in system, maybe just maybe this could still work, the Daredevil came close enough to web him, but also within neut range, realising it's mistake the DD pulled range again, but the Slasher didn't quite make it out, that 90% web really ruins your day. Support landing on the field sealed the fate of the Rupture, both the Daredevil and Rupture followed the Navy Slicer into the void. GF's exchanged in local, and to the winner goes the spoils.
It's always nice to get to loot the field and reimburse the losses.

Also props to Randy Wray for the original Slasher fit.
Posted by Unknown at 17:42